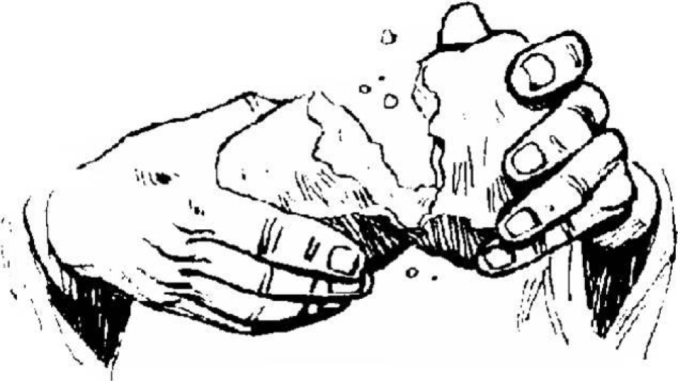 One night, during my chaplaincy internship at a children’s hospital, I was on-call and received a page from the nursing staff in the ICU. When I arrived I saw several medical staff standing around the door of a patient’s room, all wearing the dark faces of anguish and I knew that something was happening; that a child was about to slip away from this world and the chaplain had been called to console and be with the family.

The head nurse came up to me and explained that there was a child in this room who had been in a terrible accident and their body was beginning to shut down, that there was nothing the doctors could do. It was explained to me that the mother had, reluctantly, decided to remove the life support that was keeping her child alive.

“Would you be with her?” The nurse asked me,  “They need support.”

This mother was alone and was rocking her child’s body back and forth. She was weeping loudly. The child had not yet passed away but the life support had already been removed and this mother was saying goodbye.

I sat with her for a long time. A lot of the time was spent in silence. Although, I did pray for her and her child and I did sing hymns with her. And finally, when I couldn’t keep the tears at bay any longer, I wept with her.

Finally, she said, “I can’t stay here. I need to go. I can’t watch this happen. I have to say goodbye now.”

She laid her child down in the hospital bed, she covered her child in white blankets. And as she said her final goodbye she kissed her child on the forehead and left the room wailing and weeping. I walked with her and prayed with her one more time before we parted ways.

In the days that followed I was on-call at the hospital and I continued to visit this child. I had come to the room hoping I could be present as the child passed away. That I might be able to provide prayer and comfort to the nurses who had grown attached to this child.

But every time I came to that room I found that the child was still alive. And on the third day after removing life support from this child, the child opened their eyes.

The doctors were called. The nurses were amazed. This child was alive! And not only that, the child was answering yes and no questions. They called the mother right away and explained, “Your child is alive. It’s a miracle!”

When I saw the mother again it was in the same room. She was sitting on her child’s bed holding their hand. Doctors were standing in the room talking to her, explaining that this was indeed a miracle. And while many of us may hear this remarkable story and think this mother should be jumping for joy, I can tell you, she was not happy…

The mother interrupted the doctors and said through tear-filled eyes, “I already said goodbye. How is this happening?”

At that moment, the mother ran out of the room wailing and weeping again. I followed her and we talked while she wept. And in our conversation I came to realize this mother was terrified, exhausted and in the dark throes of painful grief still.

How could it be that her precious child was alive when she had just handed him over to death? She could hardly accept this, because losing her child had been so devastating she could hardly allow herself to feel joy at the turn around her child was making. She felt abandoned, alone, scared, sad.

“What if I have to say goodbye again?” She asked, “I can’t go through this again.”

It took several days and the dramatic improvement of her child’s health for this mother to experience joy again. Whenever I spoke to her afterwards, she always mentioned that night she had said goodbye. For the weeks that followed this mother was still in awe, still terrified and still grieving, still unsure of what to make of this miracle, but always clinging to hope.

And who can blame her for that? Death, after all, is supposed to be a sure thing. No one comes back from the dead. And when people do die, new life feels far off, joy feels distant and impossible.

I think about this mother when I hear our Gospel story today. The disciples on the road to Emmaus were devastated too. They had just lost their beloved, their teacher, their hope for salvation. They felt abandoned, alone, scared, sad. And what’s more, a bunch of crazy women were running around saying their savior was alive again. For these disciples, it’s like salt in the wound to hear these stories of resurrection.

But then Jesus, the resurrected, finds them on the road, in the mundane daily routine of their lives as they journey to Emmaus. They can’t recognize him for who he is as they walk along. They can’t see him as anything other than a stranger as they recount their sorrows about all the things that have just taken place. Their grief blinds them in this moment. Even when Jesus begins to explain the scriptures to them, they cannot recognize him for who he is.

But who can blame them for this? After all, they feel devastated, abandoned, alone, scared, sad.

It’s not until they come together for a meal, when they sit down and break bread together, that they are able to see Jesus right in front of them.

In that moment that the bread breaks, Jesus appears to his devastated, grief-stricken, weary followers and they are finally able to see him.

It might not have happened how the disciples were hoping for it to happen, his appearance was abrupt and surprising. It was strange and mysterious, after all the story says Jesus vanished as soon as his disciples recognized him. But he appeared to them nonetheless. He appeared to them in their grief-stricken state as they broke bread at the table together.

This story in Luke is telling us something very important about the nature of God. As if Easter wasn’t enough, this moment when Jesus breaks bread with his weary disciples shows us that God never abandons us, even when it feels as though all hope is lost, even when miracles have happened that we can’t accept or receive.

This is the centerpiece of our faith. That even in death, there is life. Even in hopelessness, there is hope. Even in our darkest moments, there is still the possibility of light. It may not happen the way we want or expect it to, but miracles do happen because ours is a God who is always with us and always for us.

And we practice this centerpiece of our faith at the table. This table. With this bread, this wine, in this community. We come here week after week to take part in remembering that Jesus was crucified and rose again.

We come to this table to practice the belief that we are not alone, that God is with us, that love wins, that there is always light in the darkness. That miracles are possible amidst the grief, loneliness and fear.

Because ours is a God that would put on the flesh of humans and come down to be with us. Ours is a God who would suffer and die for us. And we come to this table to witness the Jesus that suffered, died and rose again.

We come to the table to witness the Jesus that journeys with us, the Christ that continues to walk with us, in all of our joys and all of our sorrows.

This story of the Disciples on the Road to Emmaus is our story.

The world today is full of fear and sadness, suffering and loss and still we come to this table, week after week, to eat of this bread and drink of this cup.

At the end of my internship, the mother and her child were still in the hospital. I went to visit them one last time. I went to the room and found the mother helping her child sit up in his bed. I explained I had just come to say goodbye, my internship was finished. And before I left, the mother pulled me aside and thanked me.

“Thank you so much for everything.” She said.

“Of course,” I said, “although I don’t know how much help I was.” I was feeling a little embarrassed and ashamed at remembering the tears I shed that night.

“Yes, you were. You helped me feel like I wasn’t alone when you cried with me that night.”

At the Harris Academy food pantry, at the potluck dinners with the homeless, in the singing of hymns at the nursing home, in the support we give to the local diversity club, for everything we do in this community: we are sharing the bread of life and cup of salvation.

We are making a statement of our faith. We are showing this community that they are not alone, that God is with them, that there is always light in the darkness.

When we go into the trenches of despair with others, when we cry with them and celebrate with them, we are showing them that they are not alone. We are walking the way of Jesus.

We come to the table to be fed the bread of hope, love, new life and resurrection.  And we go out into the community to feed others this bread.

Jesus is made known to us in the breaking of the bread. Take, eat this bread and then take it out into the world and break it with others. Show them they are not alone, that God is with them, that there is still hope, and new life is always possible in this God who so fiercely loves us. 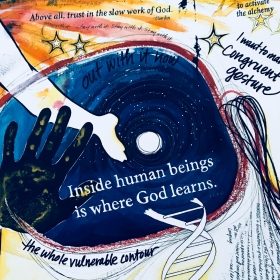 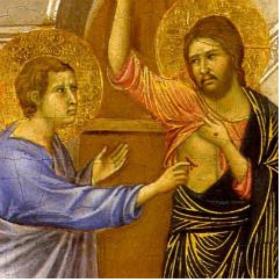 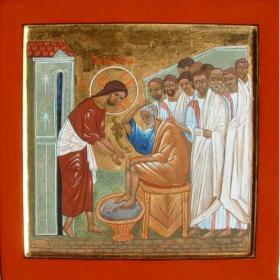 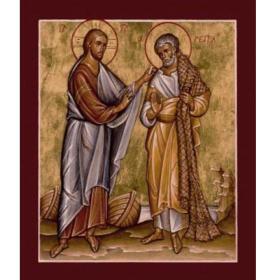 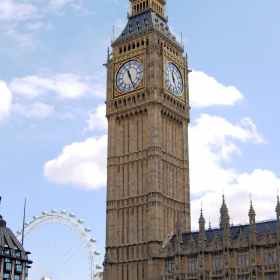 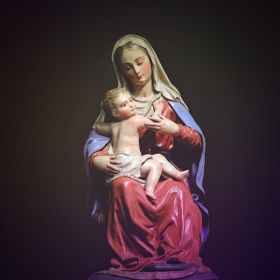 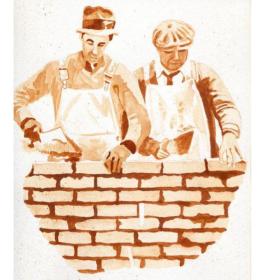